Rhode Island isn’t known for its winter sports availability. While we have plenty of winter recreation and activities, our tiny state’s proximity to the coast means we don’t have the same kind of mountains as our neighboring states—New York, Massachusetts, and Connecticut. In fact, we have just one ski resort: Yawgoo Valley, which boasts a tiny 200ft vertical drop. That’s not to say we don’t appreciate this place. It’s a great destination for families and beginners. However, more experienced skiers and snowboarders may not feel satisfied after a day at Yawgoo. Luckily, Rhode Island is in a prime spot for even the most devoted shredders. Some of the best skiing is available just a few hours’ drive away. Below, we’ve briefly profiled some of the best ski areas near Rhode Island.

New York Ski Trips—New York may be known for its city, but that’s just part of what this huge state can offer. The Appalachian Mountains cut right through the Empire State, heading north to Vermont, New Hampshire, and Maine. As a result, there are over fifty ski resorts scattered across upstate, and many of them are just a few hours away from Rhode Island. If you really want a challenge, head up to Whiteface Mountain, the most popular resort in the eastern United States. It has the highest vertical, measuring 3,430 feet. Though slightly farther away from Rhode Island than other New York offerings, even the most advanced skiers will find something challenging about this mountain. Lift tickets are likely to be slightly more expensive than in other parts of the Northeast, but a quick price check can let you know which resorts are offering deals.

Connecticut Ski Trips—Rhode Island’s neighbor to the West, Connecticut offers the most immediate access to great skiing. The state has four ski resorts of varying difficulty, but their proximity to popular Rhode Island towns makes them the perfect fit for a weekend away. The resorts are also relatively spread out, meaning there’s plenty of room for lodging nearby. Mohawk Mountain is the most popular of Connecticut’s four resorts, but Woodbury Ski Area offers a large tubing park and additional amenities. Want something a bit different? Ski Sundown offers some of the best night skiing in the region.

Massachusetts Ski Trips—This state sits on Rhode Island’s northern border. Massachusetts ski resorts offer an excellent mix of affordability, proximity, and difficulty. You’ll have plenty of options scattered throughout the state. Though resorts near Boston are closest to Rhode Island, those out in Western Mass have a distinct feel and culture. We recommend Berkshire East or Jiminy Peak, especially for experienced skiers. Regardless, Massachusetts has a surprising number of ski shops, many of which offer excellent discounts. Before heading up, be sure you have your tickets, equipment, and lodging booked—these resorts can get busy pretty quickly.

Rhode Island is the perfect summer New England destination; with plentiful shoreline, stunning mansions, and a plethora of outdoor activities, this is an excellent place to spend a July weekend. However, our lovely little state is a perfect place to visit regardless of season. Yes, that also includes winter. While some tourists may hesitate at the thought of visiting New England in the midst of winter, Rhode Island provides a surprisingly good time, even in the dark, cold months of January and February. Below, we’ve included our favorite Rhode Island-centric winter activities—perfect for residents and visitors alike.

Go sledding. Rhode Island may not have the mountains of nearby New York, Massachusetts, and Connecticut, but it sure has plenty of hills. Diamond Hill State Park, located in Cumberland, Rhode Island, has an excellent hill and indoor visitor center, perfect for a day outside. This park was once used for skiing, and you might even see some of the abandoned chairlift equipment as you zoom by.

Visit the Providence Athenaeum. The Athenaeum is, without a doubt, Rhode Island’s most beautiful library. Featuring robust children’s, general, and special book collections, this place will make a book-lover out of anyone who steps through its doors. In addition to hosting a seemingly endless collection of books, the Athenaeum also hosts readings and events throughout the year. 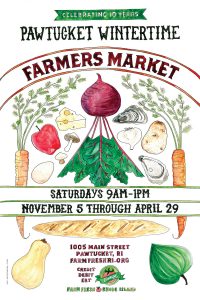 Visit a winter farmers’ market. Rhode Island takes its farmers’ markets seriously, even in the winter. Though you may not see as much fresh produce as usual, the Winter Farmers’ Market at the Hope Artiste Village is a great way to stock up on local eggs, cheeses, meats, seafood, herbs, and vegetables. With plenty of ready-made items, you can comfortably snack while chatting with local vendors. Photo from Pawtucket Winter Farmers Market.

Take a ride on The Polar Express. Every year, the Blackstone Valley Train Depot in Woonsocket, RI transforms its station and train into a remarkably believable replica of the famous Polar Express. Families will spend three hours around the station and living out the narrative of the beloved holiday book. A ninety-minute train ride complete with hot chocolate and candy is enough to make any visitor enjoy winter in this wonderful state.

Drink hot cocoa with a friend. This one might seem a bit obvious, but if you’ve ever visited Duck and Bunny in Providence, you understand out inclination to include this one. A self-proclaimed “Snuggery,” this cozy, comfortable restaurant serves specialty hot chocolate, crepes, and gourmet cupcakes. Stop in for afternoon tea for a truly special winter day.

Rhode Island has everything—beaches, breweries, islands, an incredible food scene, world-class educational institutions, and incredible, one-of-a-kind museums. From the gardens of the Breakers to the planetarium and natural history museum, you do not want to miss the opportunity to see one of these historic collections.

This small estate is the oldest and most northern topiary garden in the United States. Open seasonally, the garden is run by the Preservation Society of Newport County. Green Animals remains a rare example of a self-sufficient estate combining formal topiaries, vegetables and herb gardens, orchards, and a Victorian home overlooking Narragansett Bay.

The Providence Children’s Museum is one of the largest, most comprehensive in the country. With programming every day, a range of rotating exhibitions, and countless educational programs, this is a staple in the childhoods of many Rhode Island natives. Membership fees are relatively low, making this an excellent and affordable option for both visiting and residing families.

Founded in 1998 by Judy Goffman Cutler and Laurence S. Cutler, the National Museum of American Illustration was originally a private collection. Now, it houses and exhibits Golden Age American Illustration art and American illustration from all periods, styles, and talents. The gardens outside the museum were designed by American landscape architect Frederick Law Olmsted, making this a delight for lovers of architecture, art, and landscape.

The Museum of Natural History is Rhode Island’s only natural history museum, and it is home to the state’s only planetarium. For more than a century, the museum has served as a unique educational, scientific, and cultural resource by offering exhibits and programming for children and adults alike. Perfect for lovers of the environment and history, make this a stop on your trip through Rhode Island.

Rhode Island is a haven for craft beer enthusiasts. Every few months, a new brewery pops up with a new take on small-batch and limited-edition brews just waiting to be tasted. If you’re in Rhode Island, be sure to stop at one of these five Rhode Island staples. 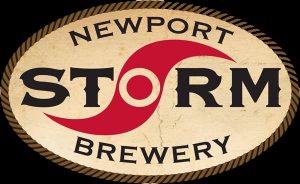 Started in 1994, Newport Storm Beers has released nearly 100 unique craft brews. They were a pioneer in the idea of limited release beers and canned craft beer. They host both seasonal and year-round brews. Beer tastings are around $10 and include 4 Newport Storm samples, a souvenir tasting glass, and a self-guided or guided tour of the facility. They currently operate under the name Newport Craft Brewing and Distilling after having started a concomitant distillery in the mid-2000s. 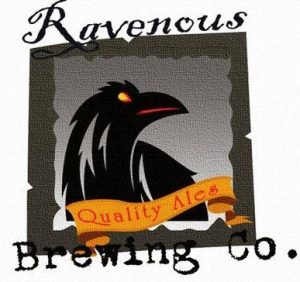 One of Rhode Island’s first small-batch craft breweries, Ravenous Brewing Copany opened in 2012. Their beers are made in small batches and require a lot of labor to produce. Tours are available upon request, but tastings occur on Thursdays, Fridays, and Saturdays. If you stop by on a Thursday, you’ll have the treat of beer and pizza. 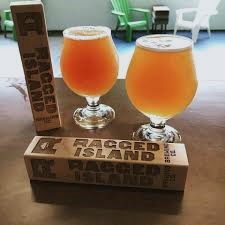 Opened in March of 2017, Ragged Island just celebrated its first year of operation. They specialize in IPAs. The brewery does not currently bottle their beers, so the taproom is the only chance you have to enjoy their brews before they hit the shelves. The taproom is open from Wednesday to Sunday, and their brewers and bartenders are always interested in answering your questions about their brews. 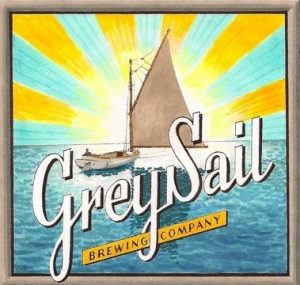 Grey Sail Brewing, opened in 2010, offers year-round, seasonal, and limited brews. Their Flagship Ale, first brewed on 11/11/11, it now a gold-medal-winning beer. They offer tastings and a growler station, and the taproom is open from Wednesday to Sunday. The brewery also hosts community events, such as music, parties, and fundraisers. 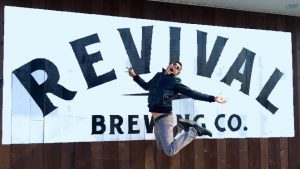 The founder of Revival Brewing, Sean Larkin, has been creating craft beers for two decades. Revival ‘s beers are named for famous Rhode Island attractions, and the brewery does what it can to collaborate with other businesses in the state. The tap room is open seven days a week, and you can taste their beers all over the state.