Ten miles offshore sits Block Island—a quaint place with beautiful beaches, friendly residents, and wonderful culture. The island is part of the Outer Lands region, a coastal archipelago, and part of Washington County, Rhode Island. Visitors can reach the island by ferry from Point Judith in Galilee on the south coast.

Block Island is home to several fun, annual events, the most notable being their Fourth of July parade. Any visitor or resident can enter a gloat into the parade if it coordinates with the year’s theme. Prizes are awarded in several categories, and participants have a chance to with the $500 grand prize. Additionally, the Island hosts Block Island Race Week each summer, which includes a week-long sailboat race.

Visitors can marvel at the Mohegan Bluffs, the site of a pre-colonial battle, and long staircases to clay cliffs and beaches. The most notable landmarks, however, are the lighthouses. The Victorian Southeast Lighthouse, which currently sits atop a bluff, was moved in 1994 to prevent it from falling into the eroding beach. Similarly, the North Lighthouse, built in 1867, has an interpretive center for history lovers.

Residents and visitors alike spend their days walking along the pristine water, biking through town, and visiting one of the several independently-owned businesses in the area. If you find yourself in New England or Rhode Island during the summer months, be sure to check out this beautiful place. 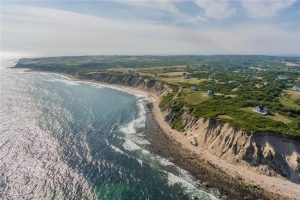